Using the technique of electron microscopy, this is one of the first images ever taken that proved that the neurons do not physically touch. The space between the junctions of neurons is called the synapse and the work of Palade, de Robertis, and Bennett definitively proved this, thus validating the initial idea by Ramon Y Cajal (proposed in the early 1900s in his “Neuron Doctrine”).

Now, to pick up where we last left off….

A quick note: I’ve decided to try to keep my basic neuroscience posts as brief as possible and try to keep the details to a minimum. Let’s see how that goes…

Also, if you see this symbol

it means that I am relating the content to drug addiction.

But the pre and post-synaptic neurons don’t physically touch. There’s actually a little bit of space between them called the synaptic cleft. (See the diagram below for more details) 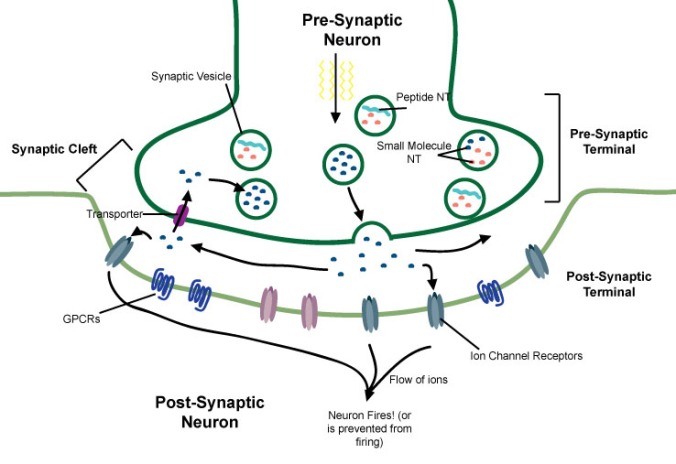 The Synapse. In this example, neurotransmitters (blue dots) are packaged into synaptic vesicles. When a current reaches the axon terminal, the vesicles fuse with the membrane, allowing the NT to be released into the synaptic cleft, where they diffuse through the cleft until binding to the appropriate receptor. In this example, the NT binds to an ion channel receptor, which allows ions to flow into the post-synaptic neuron which may result in the neuron firing (or not firing). NT are then cleared from the cleft, in this example, by being brought back into the pre-synaptic neuron via a transporter.

Note: in some cases neurons talk to other cell types. For example, a neuron can synapse on a muscle fiber and when the neuron fires it causes the muscle to contract.

How do the neurons communicate across the empty space in the synaptic cleft? What are the “words” that neurons say to each other? And what happens to the “listening” neuron once it hears those words?

But what are the neurotransmitters the brain normally makes? And what do they do?

Neurotransmitters (NT) are molecules that are made, stored, released, and eliminated by neurons. The total number of neurotransmitters that the brain naturally makes is not known but so far over 100 have been identified. This diverse group of NT can be roughly broken into two groups 1) small molecules and 2) peptides.

Some of the common Small Molecule Neurotransmitters.

Small molecule NT  contain only 20 or so atoms and often resemble amino acids (the buildingblocks of proteins). These include ones you may have heard of like serotonin, glutamate, acetylcholine, GABA, epinephrine (adrenaline), norepinephrine (noradrenaline) or the one we in the addiction field care a lot about: dopamine.

The peptide NT are small protein molecules. Proteins are large macromolecule made of amino acids and carry out many of the functions of a cell. Proteins can contain hundreds of amino acids but peptides generally only have a dozen or so. Still, the peptide NT are much larger than the small molecule NT. Some of these include oxytocin, vasopressin, neuropeptide Y or the endogenous opioid peptides: enkephalin, dynorphin, and the endorphins. We’ll spend some time talking about the opioids in later posts.

An example of a Peptide Neurotransmitter: Beta-Endorphin. Note that it is much larger than any of the small molecule NT.

NT are packaged in small packets called synaptic vesicles. When an electrical current makes it way down to the axon terminal, this causes synaptic vesicles to move to the cell membrane of the pre-synaptic terminal, fuse with that membrane, and release its NT into the synaptic cleft.

Once released, the NT diffuse through the synaptic cleft. They then act on the post-synaptic neuron by sticking to or binding with special types of protein molecules present at the cell membrane called receptors. Each NT has its own special type of receptor that it binds to and activates. However, NT have been found to activate several types of related receptors.

Just like the neurotransmitters themselves, there are many different receptors but they can be generally categorized into two types: ion channels and G-protein coupled receptors (GPCRs). 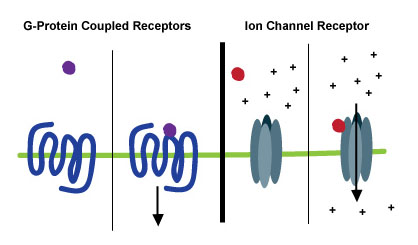 When a neurotransmitter binds to a receptor that is an ion channel, it opens this channel and allow the entry of a specific type of charged atom, called ions, to enter the post-synaptic neuron. Each ion channel is specific to a particular type of ion. Some examples of ion channels that exist are the NMDA receptor and the AMPA receptor. Some examples of ions important to neuroscience are potassium ions (K+), sodium ions (Na+) and chloride ions (Cl-).

When an ion channel opens and ions flow into the post-synaptic neuron, if enough of them enter, they can cause that neuron to generate a strong electric current and fire. After all, an electric current is nothing more than the flow of ions. However, the is a very complicated process so I’ll mention nothing more on the subject right now. But if you’re curious, the type of current that is generated when a neuron actually fires is called an action potential.

The other types of NT receptors are GPCRs and they don’t directly cause ions to flow into the neuron but change other properties that may help the neuron to fire more easily (or make it more difficult for a neuron to fire).

An important group of GPCRs that are relevant to drug addiction are the opioid receptors. For example, morphine activates the mu opioid receptor (MOPR). We’ll discuss this more later.

Lastly, I just need to briefly mention that once a neuron fires and NT are released into the synaptic cleft, they need to be removed as quickly as possible. The two ways of doing this is by physically changing the NT into a different chemical and this is done by special proteins called enzymes.

The second way that NT are removed from the synaptic cleft is by bringing them back into the pre-synaptic neuron. This is accomplished by another type of protein called a transporter.

Some drugs, like cocaine, work because they prevent transporters from working and lead to too much NT in the synaptic cleft.

In conclusion, neurotransmitters are:

I think now we have good foundation in some very basic concepts in neuroscience.

My next original post will now look more specifically at how drugs actually affect neurotransmitter release from neurons and why this is important.

One thought on “Synapse to it”