I decided to take a little break from my typical serious and lengthy addiction/neuroscience blog posts and talk about something a little lighter (and cuter)…dogs and cats! Or to be more specific, the biology of pet aging.

A recent special issue on Aging in the journal Science included a news article by David Grimm on aging of our pets and other animals and what it may mean for the biology of aging.

Did you know the oldest cat ever, Crème Puff, was reported as 38 years old and the oldest dog, Bluey, was 29?! Both lived twice as long as average. These types of impressive feats of longevity have never been achieved in humans, not even close (the oldes human was 122 but every heard of a 140 year old?). But what can pet aging tell us about animal aging or aging in general?

If you plot animal size versus animal age you get a trend that has been known for years: bigger animals live longer than smaller animals.

In fact, this is the only correlation that’s predictive of animal longevity. Numerous theories have been generated as why this is.  One theory says that the higher metabolic rate in small animals  leads to increased amounts of damage-causing and age-inducing free radicals. But not much evidence exists to support this idea or others like it.

Dr. Steven Austad  of the University of Alabama, an expert on animal aging, thinks it probably has to do with millions of years of evolutionary pressure that favored a slower lifespan for larger animals. From the Science article:

“Whales and elephants can afford to take their time growing because no one is going to attack them, he explains. And that means they can invest resources in robust bodies that will allow them to sire many rounds of offspring. Mice and other heavily preyed-on small animals, on the other hand, live life in fast-forward: They need to put their energy into growing and reproducing quickly, not into developing hardy immune systems, Austad says.”

One interesting turn is that when you compare land mammals to birds, smaller birds tend to outlive their land-locked counterparts. But the same argument can apply: flight is a great way to avoid predators so a similar kind of slowed-down aging may have also evolved in birds for the same reason as in whales and elephants. 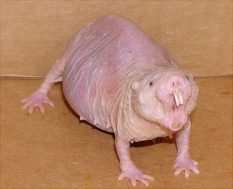 Similarly, the naked mole rat and the bat also defy their predicted lifespan given their small size but the mole rat lives most of its life underground and the bat can fly away from danger of course. No need to live hard and fast for these guys (or at least to evolve that type of lifestyle).

However, pets sort of flip the size trend upside down. Cats (both domestic and in the wild) tend to live longer than dogs (or their ancestors wolves). Austad argues this may be due to the incredible resilience of cats whereas dogs are more social and therefore may be more susceptible to communicable disease.

Equally strange is that small dogs live much longer than large dogs, which likely has nothing to do with evolutionary pressure (most dog breeds are only a few hundred years old). One argument involves hyper-secretion of hormones such as insulin-like growth factor 1 (IGF1), which may act a double-edged sword. Big dogs may get a greater boost in growth from IGF1 but accelerated aging too.

A trend that many pet owners should be happy about is that pets live longer today than ever before. And like humans, health care and diet have improved drastically for pets. Plenty of TLC for pets has surely increased their life spans!

However, much is still unknown about pet aging (and aging in general).

Perhaps pet aging can even unlock secrets to human aging. Or as Dr. Daniel Promislow of the Dog Aging Project at the University of Washington says, “If we can understand how to improve the quality and length of life, it’s good for our pets and it’s good for us. It’s a win-win.”

See these other sites for some more tidbits on animal longevity:

Or check out these review articles for topics on aging (all are open access):