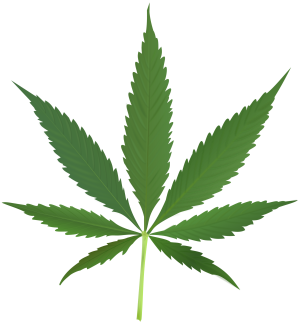 After alcohol, marijuana is the most widely used illegal drug in the United States (I mean seriously, who hasn’t smoked up at least once? According to Pew Research Center, half of the country) But pot laws are rapidly changing in many parts of the country and soon it may be as ubiquitous as alcohol. Four states in the US have legalized marijuana for recreational use and 23 total states have some form of legal marijuana use (including D.C.). While the health effects of alcohol have been well studied and are significant (some 88,000 deaths/year, the third highest cause of preventable death in the US, according to the CDC and NIAAA), little is known how this shifting trend in marijuana use will affect the country. Another important trend is the amount of THC (Δ-9-tetrohydrocannabinol, the chemical that is primarily responsible for the psychoactive effects of marijuana) in marijuana strains has been steadily increasing over the past few decades [1, 2]. The big question that researchers are asking themselves is if legal marijuana use drastically increases, what are the long-term personal and public health consequences of marijuana use? Of course, this is a huge question with many complexities.

Significantly, Marijuana is the also the most widely used illegal substance amongst youths. Adolescence (ages 12-17) is an extremely critical period for brain development [3, 4] yet the effects of marijuana on the brains of kids have not been thoroughly studied. A recent paper out of Dr. Steven R. Laviolette’s laboratory at the University of Ontario sought to answer this question: what happens to brains of adolescent and adult rats that have been exposed to THC?

Why was the research done? What is the hypothesis?

There have been a number of studies published that suggest there might be an association between prolonged marijuana use (especially of high-potency strains) and schizophrenic-like or psychotic-like symptoms [5, 6] although there is disagreement in the scientific community on the evidence [7, 8] (I may write a blog post discussing this issue in the future). It is has even been suggested that youths that smoke marijuana are more at risk for psychotic symptoms as adults [9, 10]. The author’s sought to test this directly by injecting adolescent and adult rats with THC for a number of days, waiting a period of time after the injections, then measuring the long-term effects on the rats. The team hypothesized THC would have induced long-term changes in the brains of adolescent but not adults rats, and subsequent changes in psychotic-like behavior.

How was it done?

Adolescent and adult rats were injected with THC twice daily for 11 days. The dose of THC administered was increased (escalating dose) to account for any tolerance that may occur. As an important control, separate groups of adolescent and adult rats were injected with vehicle (the solution that THC was dissolved in but minus the THC itself). Following a 30-day abstinence period after the last injection, THC-adolescent, control-adolescent, THC-adult, and control-adult rat groups were subjected to number of behavioral and molecular tests to see what effect the drug had on the animals. I need to point out that the 30-day abstinence period is significant in the rat life-span. This is enough time for the adolescent rats to become adults so what the scientists are primarily studying is the long-term effects of THC on adolescents vs adults in adulthood.

In the behavioral neuroscience field, we have devised another of tests to measure various aspects of animal behavior. Obviously we can’t inject humans with THC and see what happens so we have to use rodents and identify behaviors that approximate a similar behavior in humans. Of course, rodent behavior is no where near as complex as humans but rats are remarkably sophisticated animals (ask anyone living in New York) and scientists have developed a number of ways to measure things from motivation to social behavior to anxiety to depression.

In this experiment, a social test was used, two different types of anxiety tests and a motor activity test. The tests measured effects on motivation, exploratory-behavior (another indicator of how motivated rats are), social interaction, and anxiety.

The scientists also measured the activity of dopamine-releasing neurons in the living animal using a technique called in vivo electrophysiology. Recall from my post I am Neuron! that when activated, brain cells (called neurons) conduct an electrical current that results in the release of neurotransmitters onto another neuron. This electrical current is called an action potential and we can measure this by inserting a special probe into the those neurons in the animals brain (the probe measures electrical currents). Therefore, with in vivo electrophysiology we can measure every time a neuron fires (i.e. an action potential is generated) in a specific part of the brain. Using this technique, the scientists measured dopamine neurons in an important region of the brain called the VTA and how often these neurons fire in THC vs control rats. Check out this video for more details on in vivo electrophysiology.

Finally, brains from animals were dissected and a number of protein molecules were studied using a common technique in molecular biology called a Western blot (or known as an immunoblot). A Western blot takes advantage of antibodies that are able to recognize and stick to one specific type of protein. Therefore, this assay can tell you two main things 1) if your protein of interest is present in your sample and 2) approximately how much of your protein there is compared to other samples. In this paper, tissue from a specific brain region is used and the protein is analyzed by Western blots in order to comparing quantities of proteins between the different experimental groups. Of course, the limitation of a Western blot is if you have a good antibody for your protein of interest. Luckily there are many biotech companies such as Cell Signaling that specialize in making and testing reliable antibodies. The scientists used the Western blots to study many proteins in a region of the brain called the prefrontal cortex (PFC), which is believed to be important in self-control and other high-function brain processes. Check out this video for more details on Western Blots.

What did they find?

THC-adolescent rats exhibited deficits in numerous behavioral experiments compared to controls while THC-adult rats did not appear to have any behavioral changes.

*Recall that these experiments were conducted 30 days after the last THC dose so the author’s show that these are long-term effects of THC on the brain of adolescent rats.

In the social activity test, rats showed little interest in interacting with a stranger rat (normal rats are usually curious about the novel stranger). THC-adolescents also did not walk around or explore a new cage as much. In the two different anxiety tests, THC-rats appeared to have be more anxious (demonstrated more anxiety-like behavior).

In the electrophysiology experiment, VTA DA neurons fired more frequently for some reason in THC-adolescents compared to the other groups.

Finally, numerous protein changes in the PFC were observed in a number of important signaling pathways such as Wnt and mTOR pathways. Interestingly, THC-adolescents vs THC-adults seemed to have opposite effects on this proteins.

Limitations to the study?

What does it mean?

Based on the behavioral and molecular data presented, this data paper suggests that adolescent rats (but not adults) exposed to THC have long-lasting changes in the brain. The author’s argue that these effects recapitulate schizophrenia-like symptoms but I am not entirely convinced. Also, THC given to rats is not the same thing as marijuana smoked by human teenagers. So it’s important to keep in mind that this is one study. In science, we never draw grand conclusions about anything based on one study. Nevertheless, several other reports have corroborated these findings (see this review paper for a summary of many of them [11]). Indeed, it does seem that marijuana use can cause long-term deficiencies in human and rodent brains. The results of this paper are certainly intriguing and, if true, a whole host of stricter regulations on marijuana use in states that have legalized it may need to put in place to help curb increasing marijuana abuse amongst youths.